Britney Spears She says that she will probably never perform on stage again… and her father and guardianship is torn apart by the trauma she has gone through over the years.

The singer posted – then deleted – her frustration on Instagram Sunday… puffing up the fact that she has no control over her music videos and photo shoots while in guardianship. 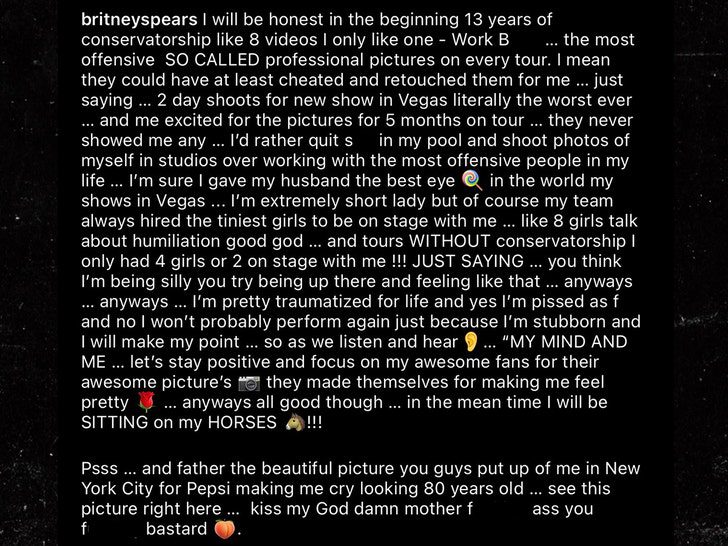 She says the “named” professional photos she got during her tour were offensive…belief that the least they could do was touch her.

BS says she was traumatized throughout her 13-year upbringing…and prefers to comment entirely—adding, “No, I probably won’t perform it again just because I’m stubborn and I’ll make my point.”

For those unaware, 2017 was the last time Britney did a live show, and shut down her Vegas residency…of course, it was recently back to music With a cooperation remix of Elton JohnIt is “Hold Me Closer.”

Fans were hoping BS and EJ would hop together sometime soon to perform their hit…but that sounds like a fantasy, now.

Then she turned her attention to Jimmy …inviting her father to come out for a Pepsi ad shown in New York City that made her cry, claiming that she looked eighty.

She ends the rant towards the pops – “Kiss me you motherfucker you bastard you bastard.”