After achieving the major milestone of aligning the telescope with NIRCam, Webb’s team began extending telescope alignment to the Guide (Fine Guidance Sensor, or FGS) and three other science instruments. This six-week process is called multi-domain alignment (MIMF).

On space telescopes like Webb, all cameras see the sky at the same time; To switch a target from one camera to another, we reset the telescope to place the target in the field of view of the other device.

After MIMF, the Webb telescope will provide good focusing and sharp images in all instruments. In addition, we need to know precisely the relative positions of all fields of view. Over the past weekend, we mapped the positions of the three near-infrared instruments relative to the pointer and updated their positions in the software we use to orient the telescope. In another instrument milestone, the FGS recently achieved its first “precision guidance” mode, mounted on a guide star with the highest level of accuracy. We also took “dark” images, to measure the response of the primary detector when no light reached it – an important part of the instrument’s calibration. 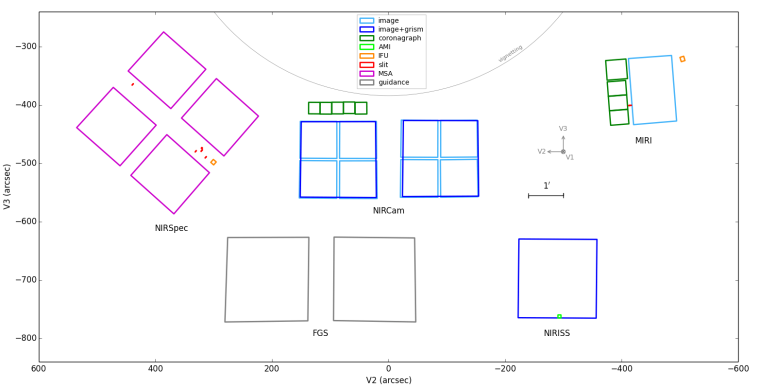 The Webb Guide (FGS) and four science instruments (NIRCam, NIRSpec, NIRISS and MIRI) share the Webb Telescope’s field of view optics, but they actually see different parts of the sky on any given observation. credit: NASA

Webb’s mid-infrared instrument, MIRI, will be the last instrument to align, still waiting for the coolant to cool it down to its final operating temperature, just under 7 degrees above[{” attribute=””>absolute zero. Interspersed within the initial MIMF observations, the two stages of the cooler will be turned on to bring MIRI to its operating temperature. The final stages of MIMF will align the telescope for MIRI.

See also  Kilonova's radioactive glow suggests a rapid regression of the late spin of neutron stars into the black hole.

You might be wondering: If all of the instruments can see the sky at the same time, can we use them simultaneously? The answer is yes! With parallel science exposures, when we point one instrument at a target, we can read out another instrument at the same time. The parallel observations don’t see the same point in the sky, so they provide what is essentially a random sample of the universe. With a lot of parallel data, scientists can determine the statistical properties of the galaxies that are detected. In addition, for programs that want to map a large area, much of the parallel images will overlap, increasing the efficiency of the valuable Webb dataset.