In this artist’s representation, the merger of two neutron stars to form a black hole (hidden within a bright bulge in the center of the image) generates opposing, high-energy jets of particles (blue) that heat the material around the stars, causing them to emit X-rays (reddish clouds). ). The Chandra X-ray Observatory is still detecting X-rays from the event today. They can be caused by a shock wave in the material around the black hole, or by violent material falling into the black hole (a yellowish disk around the central bulge). Credit: X-ray data from NASA, CXC, and Northwestern Univ./A. arguing. Visible by NASA/CXC/M. Weiss

Excess X-ray emissions from the tailings four years after the merger indicate a rebound from the late collapse.

When two neutron stars collide with each other and merge to form a[{” attribute=””>black hole — an event recorded in 2017 by gravitational wave detectors and telescopes worldwide — does it immediately become a black hole? Or does it take a while to spin down before gravitationally collapsing past the event horizon into a black hole?

Ongoing observations of that 2017 merger by the Chandra X-ray Observatory, an orbiting telescope, suggests the latter: that the merged object stuck around, likely for a mere second, before undergoing ultimate collapse.

The evidence is in the form of an X-ray afterglow from the merger, dubbed GW170817, that would not be expected if the merged neutron stars collapsed immediately to a black hole. The afterglow can be explained as a rebound of material off the merged neutron stars, which plowed through and heated the material around the binary neutron stars. This hot material has now kept the remnant glowing steadily more than four years after the merger threw material outward in what’s referred to as a kilonova. X-ray emissions from a jet of material that was detected by Chandra shortly after the merger would otherwise be dimming by now.

While the excess X-ray emissions observed by Chandra could come from debris in an accretion disk swirling around and eventually falling into the black hole, astrophysicist Raffaella Margutti of the University of California, Berkeley, favors the delayed collapse hypothesis, which is predicted theoretically.

“If the merged neutron stars were to collapse directly to a black hole with no intermediate stage, it would be very hard to explain this X-ray excess that we see right now, because there would be no hard surface for stuff to bounce off and fly out at high velocities to create this afterglow,” said Margutti, UC Berkeley associate professor of astronomy and of physics. “It would just fall in. Done. The true reason why I’m excited scientifically is the possibility that we are seeing something more than the jet. We might finally get some information about the new compact object.”

Margutti and her colleagues, including first author Aprajita Hajela, who was Margutti’s graduate student when she was at Northwestern University before moving to UC Berkeley, report their analysis of the X-ray afterglow in a paper recently accepted for publication in The Astrophysical Journal Letters.

The radioactive glow of a kilonova

Gravitational waves from the merger were first detected on August 17, 2017, by the Advanced Laser Interferometer Gravitational-wave Observatory (LIGO) and the Virgo collaboration. Satellite- and ground-based telescopes quickly followed up to record a burst of gamma rays and visible and infrared emissions that together confirmed the theory that many heavy elements are produced in the aftermath of such mergers inside hot ejecta that produces a bright kilonova. The kilonova glows because of light emitted during the decay of radioactive elements, like platinum and gold, that are produced in the merger debris. 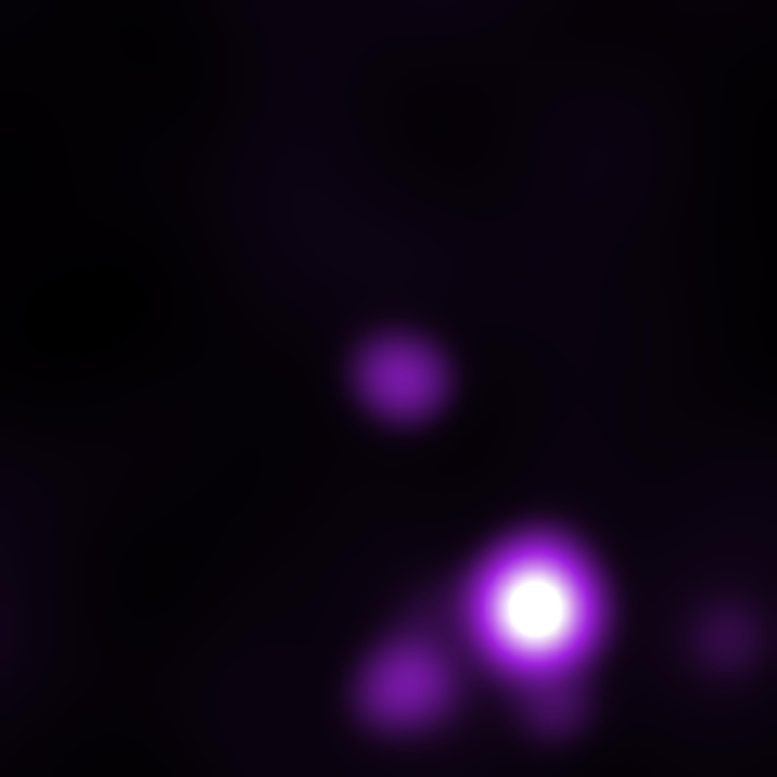 X-ray sources captured by Chandra, including, at top, the black hole that formed from the merger of two neutron stars and was first observed in 2017. Credit: NASA, CXC and Northwestern Univ./A. Hajela

Chandra, too, pivoted to observe GW170817, but saw no X-rays until nine days later, suggesting that the merger also produced a narrow jet of material that, upon colliding with the material around the neutron stars, emitted a cone of X-rays that initially missed Earth. Only later did the head of the jet expand and begin emitting X-rays in a broader jet visible from Earth.

The X-ray emissions from the jet increased for 160 days after the merger, after which they steadily grew fainter as the jet slowed down and expanded. But Hajela and her team noticed that from March 2020 — about 900 days after the merger — until the end of 2020, the decline stopped, and the X-ray emissions remained approximately constant in brightness.

“The fact that the X-rays stopped fading quickly was our best evidence yet that something in addition to a jet is being detected in X-rays in this source,” Margutti said. “A completely different source of X-rays appears to be needed to explain what we’re seeing.”

The researchers suggest that the excess X-rays are produced by a shock wave distinct from the jets produced by the merger. This shock was a result of the delayed collapse of the merged neutron stars, likely because its rapid spin very briefly counteracted the gravitational collapse. By sticking around for an extra second, the material around the neutron stars got an extra bounce that produced a very fast tail of kilonova ejecta that created the shock.

“We think the kilonova afterglow emission is produced by shocked material in the circumbinary medium,” Margutti said. “It is material that was in the environment of the two neutron stars that was shocked and heated up by the fastest edge of the kilonova ejecta, which is driving the shock wave.” 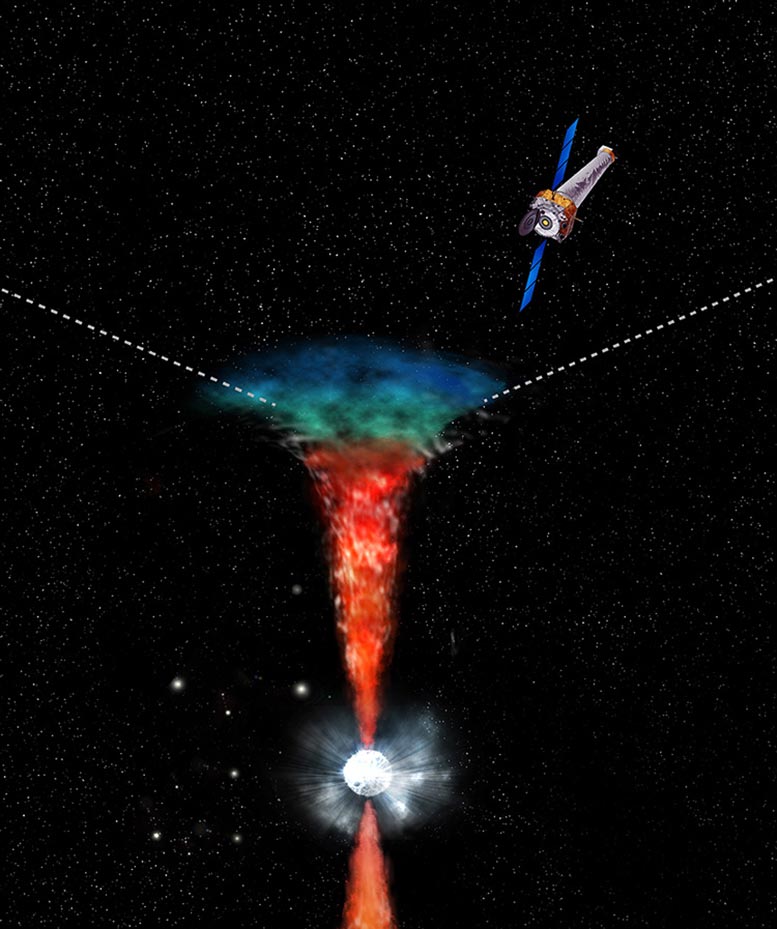 The merger of two neutron stars produced a black hole (center, white) and a burst of gamma-rays generated by a narrow jet or beam of high-energy particles, depicted in red. Initially, the jet was narrow and undetectable by Chandra, but as time passed the material in the jet slowed down and widened (blue) as it slammed into surrounding material, causing the X-ray emission to rise as the jet came into direct view by Chandra. This jet and its oppositely directed counterpart were likely generated by material falling onto the black hole after it formed. Credit: NASA/CXC/K. DiVona

The radiation is reaching us only now because it took time for the heavy kilonova ejecta to be decelerated in the low-density environment and for the kinetic energy of the ejecta to be converted into heat by shocks, she said. This is the same process that produces radio and X-rays for the jet, but because the jet is much, much lighter, it is immediately decelerated by the environment and shines in the X-ray and radio from the very earliest times.

An alternative explanation, the researchers note, is that the X-rays come from material falling towards the black hole that formed after the neutron stars merged.

Chandra is now the only observatory still able to detect light from this cosmic collision. Follow-up observations by Chandra and radio telescopes could distinguish between the alternative explanations, however. If it is a kilonova afterglow, radio emission is expected to be detected again in the next few months or years. If the X-rays are being produced by matter falling onto a newly formed black hole, then the X-ray output should stay steady or decline rapidly, and no radio emission will be detected over time.

Margutti hopes that LIGO, Virgo and other telescopes will capture gravitational waves and electromagnetic waves from more neutron star mergers so that the series of events preceding and following the merger can be pinned down more precisely and help reveal the physics of black hole formation. Until then, GW170817 is the only example available for study.

“Further study of GW170817 could have far-reaching implications,” said co-author Kate Alexander, a postdoctoral researcher who also is from Northwestern University. “The detection of a kilonova afterglow would imply that the merger did not immediately produce a black hole. Alternatively, this object may offer astronomers a chance to study how matter falls onto a black hole a few years after its birth.”

Margutti and her team recently announced that the Chandra telescope had detected X-rays in observations of GW170817 performed in December 2021. Analysis of that data is ongoing. No radio detection associated with the X-rays has been reported.