when the resident Returns for season 6 on Fox.and here he is Formally ‘when’, not ‘if’), Conrad Hawkins will already Get a new romantic partner — but Tuesday’s finale ultimately gave no indication who the lucky lady would be.

During the season’s emotional finale, Conrad frequently finds himself re-visiting the memory of his first real night between him and Nick after Gigi’s birth. During the night, Conrad bumped into a young woman whose husband was diagnosed with cancer, who was now in the intensive care unit after having an adverse reaction from chemotherapy. The confrontation made Conrad think about his death, and at home later that night, he joked – then got serious – with Nick about his desire to find another love if he died.

After a while, Conrad said to his wife, “I want you to move on.” “Just promise me, whatever, find someone who loves you as much as I do.” Nick promised, but on one condition: “Only if you do, too.” Back in the day, as Conrad and co celebrated Kate and Bill’s engagement at the group’s favorite bar, Conrad approached a table where Billy and Kidd alike were seated… and the episode ended just as it reached them.

Below, Executive Producer Andrew Chapman explains why this romantic scene feels like the right stopping point for Season 5, even though the show has yet to be renewed at the time of our conversation. Plus, what’s in store for Devon and Leela now that she’s – awesome! – Shall we go back together? Read on to find out.

TVLINE | Let’s start with that last scene, and the suspense that Conrad might be chasing after. How did you and the writers settle on that as the right option?
The entire season was, in a weird way, built around losing Nick — about grief, about coming back from grief and learning to live again. Objectively speaking, the whole show was about yard and how you embrace yard, accept the loss of others and move on with your life. Since we already had Billie on the show, and then we got Cade – and she was such an amazing character – we just loved the idea that at the end of the season, Conrad would be ready to move on, but we weren’t going to make that choice yet. We felt that this wouldn’t be appropriate for the whole idea of ​​grieving and moving forward. Choice is the premiere of next one season, and in fact, we have an idea of ​​what exactly it will be, and how we’re going to show it to the public. It would be a completely new idea.

Losing Emily Vancamp, so quickly at the start of the season, was unexpected, and we had to turn things around. But once we got comfortable with that, and once we understood that this was what the season was about, it really helped shape our finale.

TVLINE | Quite a few of our readers, at least, have expressed that it would be very dissonant to see Conrad with someone new at this point in the season. Was that a feeling you shared in the writers’ room?
definitely. We all write as members of the audience. We write because we love the show, and we think about what we you want to see. We were all, as a group, unprepared to see Conrad move on with someone else. He had a short foreplay with Marion, which was fun, but he was just a finger in the water. to Is that true Go ahead – we weren’t ready to do that. We thought, ‘No, it has to be next season.’ And by the way, Conrad Matt Kochry agreed with us completely and he was very severe he is I didn’t want to see Conrad move on yet. He didn’t want to see Conrad make a decision. And to conclude, with all those flashbacks with Nick, really closing the book on that in a really nice way. Then the audience – and we, the writers – will be able to move on.

TVLINE | You mentioned that there is already a plan for how Conrad’s casting for Season 6 will be revealed. Does that mean you’ve decided, internally, who this love will be?
Yeah. We decided, and even decided how to analyze the information. I’ll just say it’s an unexpected treat that reveals where the choices were made. 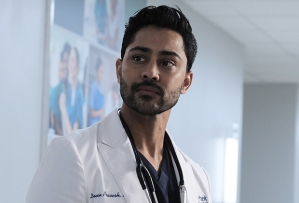 TVLINE | We’ve also seen Devon and Leela get together, but of course those opinions about having children and having a family aren’t beliefs that change overnight. Will there be more serious talks waiting for them?
absolutely yes. There is no perfect relationship. They’ve had their ups and downs this season. Again, objectively speaking, one of the things we talk about is the lives of doctors, not necessarily the lives of patients. [We’re exploring] How difficult is it to have relationships and start a family for a surgeon And Still an aspiring doctor. These are things that women have to deal with all the time, and that’s what we wanted to show, and we want to show it more next season.

But Devon is after all an incredibly understanding and compassionate man, and he came at least in part, and so did I. I think they love each other more than they have issues with each other, which is what we all ultimately decide when we’re with someone else. We’ll keep playing those stories. It was one of the things that we really wanted to do, because Conrad lost Nick and the show lost Nick, we wanted the pair to take their place as the main couple on the show – and in fact, we got two Central pairs. We have Devon and Lila, but we also got Kate and Bill. There is a wonderful harmony between the two: they have problems, but then they work out their problems; Bill has health problems, then Kate stands by his side. From now on, those characters and relationships will be central to Season 6.

TVLINE | Was Devon likely to leave?
No, not realistic. We wanted to show that he’s a real rock star in the medical world, and we really want to get on with that. He has risen to being this world doctor that other hospitals have praised and sought, and we love the idea that he’s a star. We wanted to show that, and show the way being an aspiring doctor can wreak havoc on your personal life.

TVLINE | Separately, she also addressed a story that ended up at just the right time, regarding miscarriages and life-threatening pregnancies. Was that a coincidence, or maybe more, Due to recent events?
Quite a coincidence. We planned it months in advance. We were very careful not to make it a political issue. It is taken from a true story of a man in Texas where it just happened to his wife. She was pregnant, and he tried to save them both with an ECMO machine. We made sure not to bring up the topic of abortion and make it something medical that they can try, but you don’t know [if it’s going to succeed]. We don’t want to be political this way, but these things do happen, and it was an incredibly tragic story. It felt moving and moving, especially with the idea that Devon and Lila were talking about starting a family. She had these really great bonds with our husbands. Everything only felt about certain themes, we had no idea [it would be so relevant].

Your turn, resident fans! How did you like the final show (and seeing Nick again)? Rate the episode in our poll below, then leave a comment with your full thoughts!